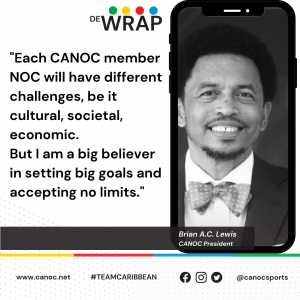 “It’s awesome,” said Lewis. “Huge. I give credit to Ms Duffy for rising to the challenge and burden of expectation. It’s a significant achievement and boost to sport and Olympism in Bermuda.”

Duffy became Bermuda’s first Olympic gold medallist, and the British Overseas Territory, with a population of just over 62,000, earned the distinction of being the smallest nation to secure an Olympic title. Bermuda now has two medals in total on the world’s biggest sporting stage. At the 1976 Games in Montreal, Canada, heavyweight boxer Clarence Hill bagged bronze.

Lewis said there’s an important lesson to be learnt from Duffy’s historic gold.

“Each CANOC member NOC (National Olympic Committee) will have different challenges, be it cultural, societal, economic. But I am a big believer in setting big goals and accepting no limits. The lesson is impossible is possible. Dream big. Ms Duffy had a big dream and never quit or gave up on her dream.”

Duffy was not the only athlete from the CANOC region to earn Tokyo 2020 precious metal on Tuesday. Cuba’s Rafael Alba fought his way to taekwondo bronze in the Men’s +80kg category. In the bronze medal showdown with China’s Hongyi Sun, Alba came away with a narrow 5-4 victory.

“If you consider all of CANOC,” said Lewis, “English, Spanish, Dutch and French, the showing has been encouraging … the best is still to come.”

Lewis, who is also president of the Trinidad and Tobago Olympic Committee (TTOC), is here in Japan, experiencing first-hand Tokyo 2020 Covid-19 countermeasures.

“The world is at another crossroad in the pandemic. It’s a marathon race between vaccines and variants. This Olympics is in the midst of the pandemic. Tokyo 2020 Organising Committee is doing their best. We are nowhere near the end of this pandemic.

“The Tokyo 2020 countermeasures,” Lewis continued, “are only effective if Games stakeholders take personal responsibility and strictly adhere to the countermeasures. Tokyo 2020 provides a template for all multisport Games due in the 2024 and 2028 quadrennial.”

Four CANOC judokas were on show yesterday at the Nippon Budokan indoor arena, here in Tokyo. 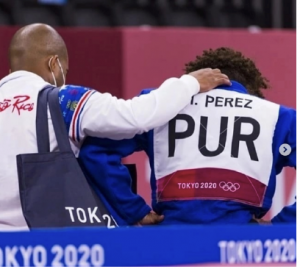 Puerto Rico’s Maria Perez was the most successful of the quartet. Perez defeated Great Britain’s Gemma Howell in the opening round of the Women’s Under 70kg event. Perez was eliminated, however, in the round of 16, stopped by Japan’s Chizuru Arai five minutes and 30 seconds into the contest.

Competing in the same division, Jamaican Ebony Drysdale-Daley lost in the first round. The Olympic debutante received three warnings for non-aggression in her showdown with Portugal’s Barbara Timo. After the third warning, victory was automatically awarded to Timo. Drysdale-Daley is Jamaica’s first-ever Olympic judoka.

Timo was eliminated in the second round by Croatia’s Barbara Matic. Arai, though, kept winning, eventually striking gold with victory over Austria’s Michaela Polleres in the final. 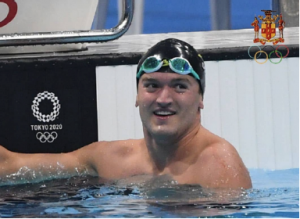 Puerto Rican Jarod Arroyo and Jamaica’s Keanan Dols were 39th and 43rd, respectively, in the Men’s 200m Individual Medley heats. Swimming in the first heat, Dols returned a time of two minutes, 04.29 seconds to finish third. In heat two, Arroyo was seventh in 2:01.92. 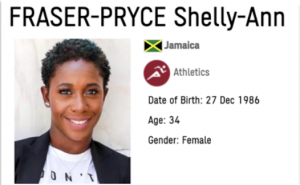 Round one of the Women’s 100m dash starts at 11.15pm. But even before the likes of Fraser-Pryce, Thompson-Herah, Jackson and Trinidad and Tobago sprinters Michelle-Lee Ahye and Kelly-Ann Baptiste step onto the Olympic Stadium track, the preliminaries will be staged, providing an opportunity for ten lesser lights to secure round one lanes.

The first preliminary round heat is scheduled for 8pm, and will feature Amya Clarke of St Kitts and Nevis. Fourteen minutes later, Antigua and Barbuda’s Joella Lloyd faces the starter in heat three. 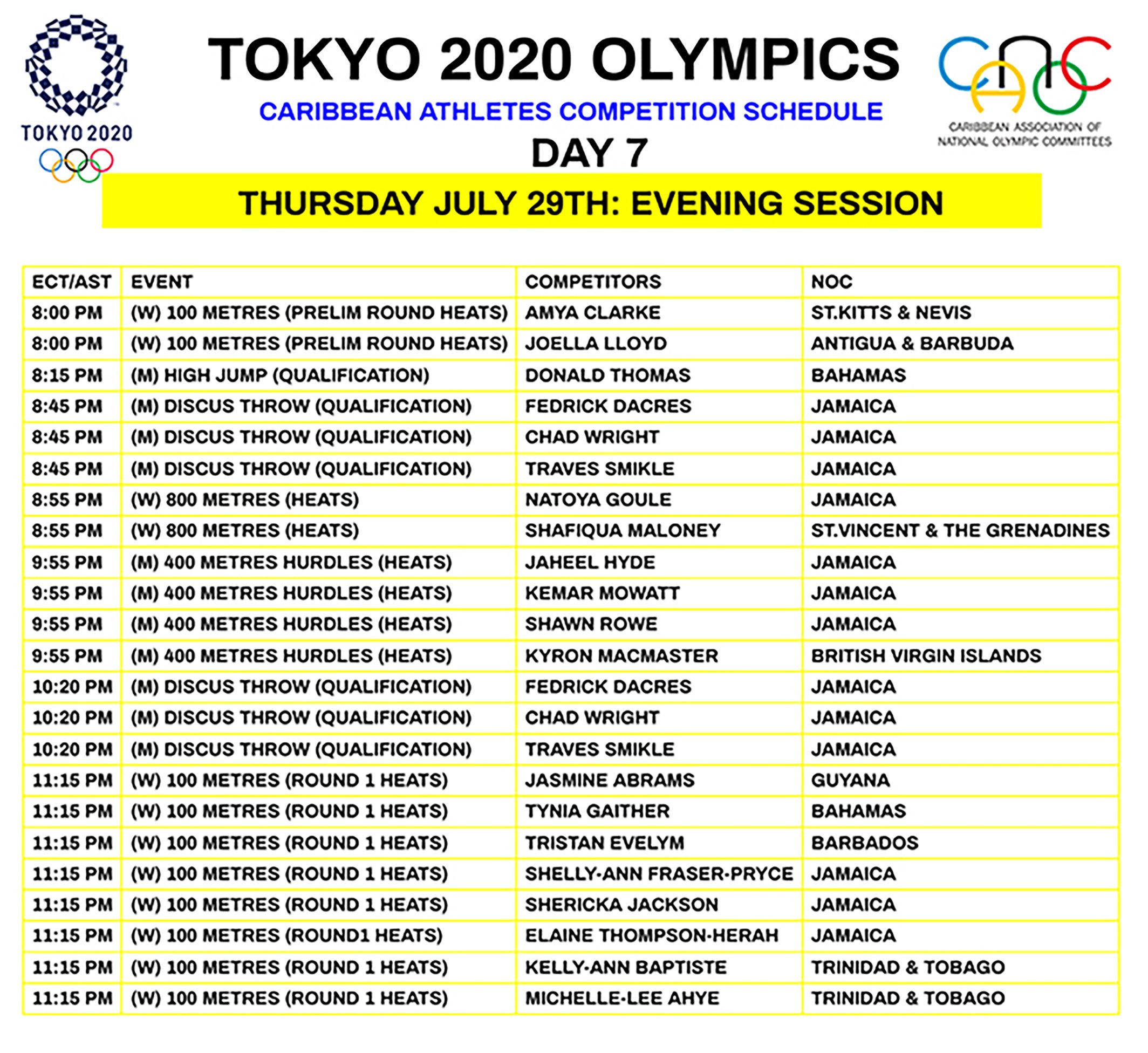 For the latest news and updates about CANOC and the Caribbean athletes in Tokyo 2020 visit our website www.canoc.net and follow us on our social media channels for more contributions from our correspondent Kwame Laurence @kwamelaurence@googlemail.com. 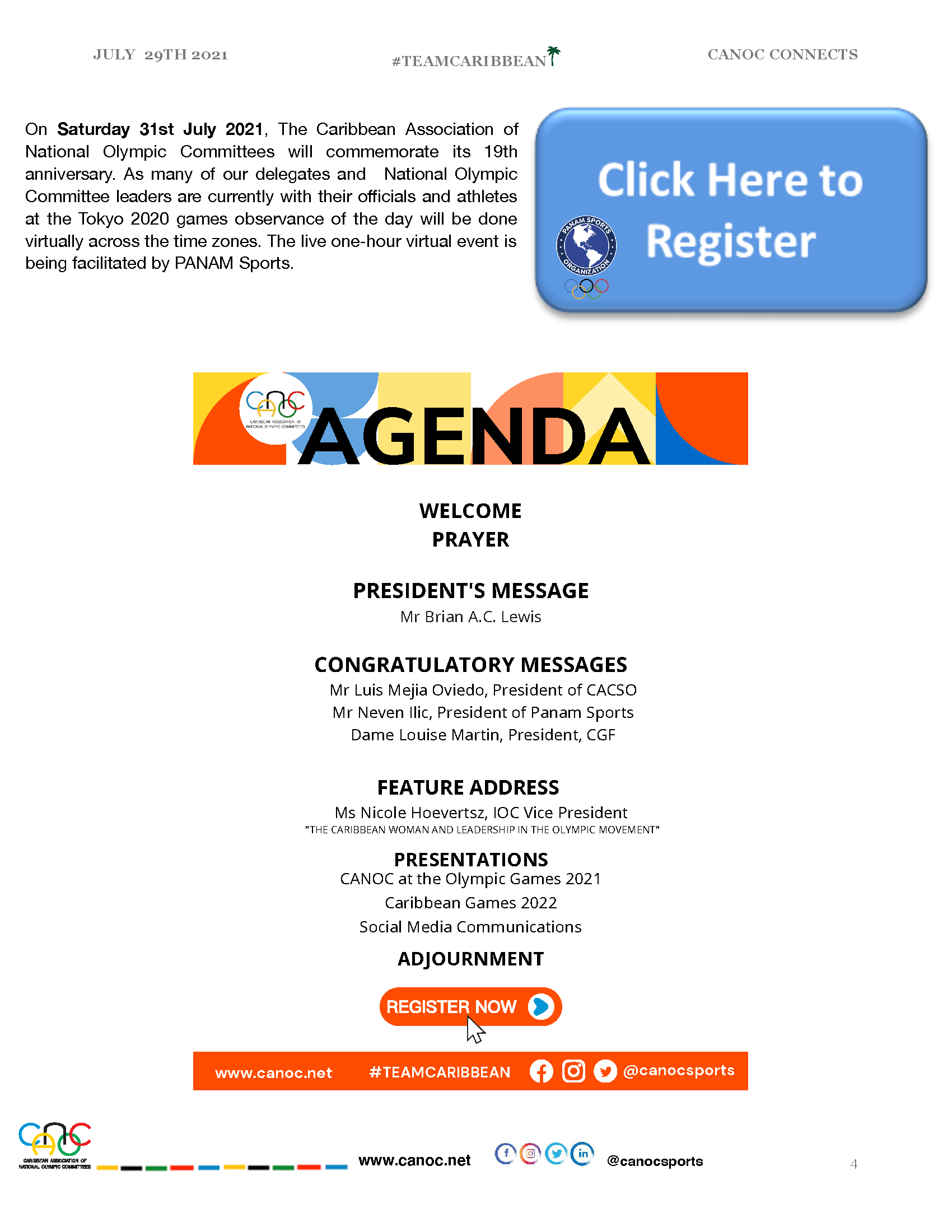 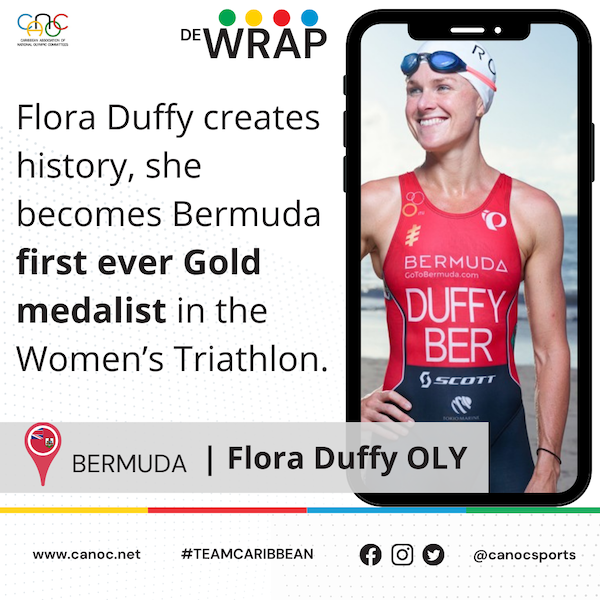 Flora Duffy is the Queen of Bermuda!

As a British Overseas Territory, Bermuda’s head of state is officially Queen Elizabeth II. Duffy, though, has ascended a throne of her own with Women’s Triathlon gold at the Olympic Games here in Tokyo, Japan.

Duffy is Bermuda’s first-ever Olympic champion. With a population of just over 62,000, the North Atlantic nation is now the smallest country to earn Olympic gold.

Duffy grabbed the historic medal late on Monday (Caribbean time) at Odaiba Marine Park. She is only the second Bermudian to secure precious metal on the world’s biggest sporting stage, following in the footsteps of boxer Clarence Hill, the 1976 Men’s Heavyweight bronze medallist.

“It feels incredible,” Duffy declared, after the race. “It makes all the injuries, hard times and the tears completely worth it. This last extra year it’s been quite challenging. And definitely I had pressure mounting.

“I am so thrilled I could execute. I achieved my dream of winning a gold medal, but also winning Bermuda’s first gold medal. It’s bigger than me and that’s a really cool moment.” 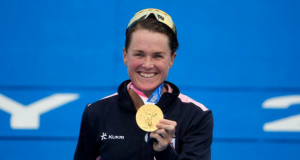 Duffy returned a time of one hour, 55 minutes and 36 seconds, finishing more than a minute ahead of Great Britain’s Georgia Taylor-Brown, the silver medallist at 1:56:50. American Katie Zaferes secured bronze in 1:57:03. She was in sixth spot at the end of the 1.5-kilometre swim.

“I felt really good today. It was pretty much like almost the perfect race for me. I had a great swim, and then I saw who I came out with and just knew we could ride together quite a lot. I felt pretty confident with them and we work together, but with the rain I was just trying to stay safe, keep fuelling and just get ready for a good run.”

“Bermuda is a small country but very passionate about its sport.
“It is going to inspire the youth of Bermuda and everyone back home that competing on the world stage from a small island is really possible.”

Duffy made solid progress during the 40km ride, and was third by the time she transitioned to the 10km run. The four-time Olympian then surged to the front and seized control. She was careful, though, not to celebrate too early.

“I tried to just keep my composure and not allow my mind to drift to the fact that this was really happening until about the last kilometre of the run. I saw my husband, he’s my coach, on the side of the road, and just gave him a little smile. From there I just sort of allowed all the emotions to come, but I truly don’t think it’ll hit me until a couple of days from now.

“To have time running in the finishing shoot to celebrate and soak it in, it’s just so special.”

Duffy has paid her Olympic dues, making the Tokyo 2020 triumph even more special. A non-finisher on debut at the 2008 Beijing Games, she returned to the Olympic stage four years later, but could only manage 45th spot in London. Duffy improved to eighth at the 2016 Rio Games, laying the foundation for her Tokyo 2020 coronation.

At the Tokyo Aquatics Centre, Trinidad and Tobago swimmer Dylan Carter was the fastest of six regional swimmers on show in the Men’s 100 Metres Freestyle heats. Carter finished third in heat six and 22nd overall in 48.66 seconds. The top 16 advanced to the semifinal round.

Swimming in heat five, Aruba’s Mikel Schreuders touched the wall in 49.31 seconds for 30th spot in the 70-man field.

Guyanese police constable Andrew Fowler produced a 55.23 swim to finish fourth in heat one and 67th overall. After the race, Fowler said he lacked competition opportunities in the build-up to Tokyo 2020. “I was looking for a 51, but I only had two races since 2019. This was my third race. I didn’t get enough races.” Given the circumstances, Fowler was satisfied with his performance.

“I always dreamed about being in the Olympics. I’m proud of myself, my coaches back home and my coaches in the USA. I did my best. I’m really proud. “I’m going home to take a break and train for the World Champs,” Fowler continued. “I’m hoping to qualify in the 100 free.”

Luc Chevrier enjoyed the best result among Caribbean sailors, yesterday. In race six of the Men’s Laser Class event, he finished 14th, one spot ahead of T&T’s Andrew Lewis. Chevrier ended the day in 31st spot on the leader board with a net score of 143, while Lewis was 30th with a score of 124. 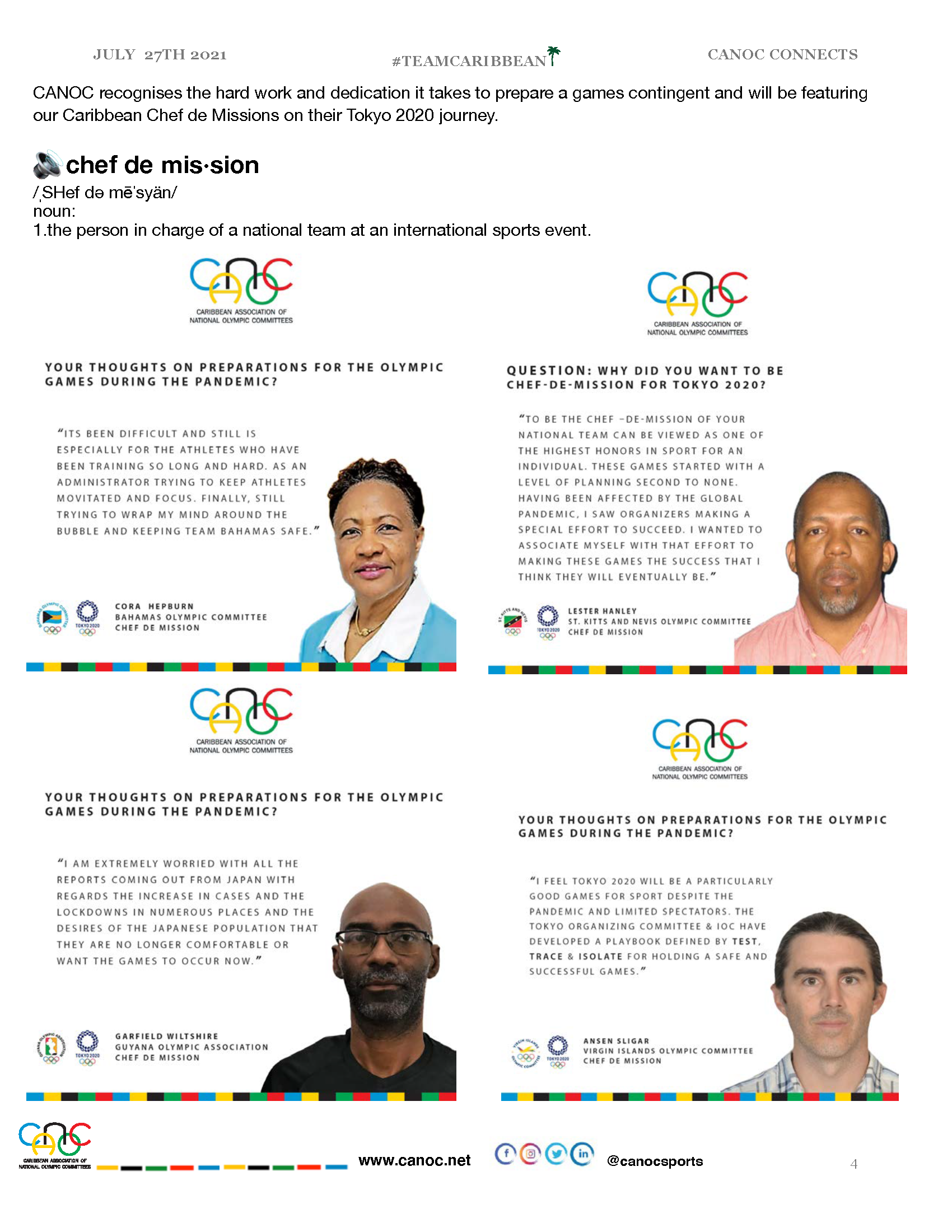 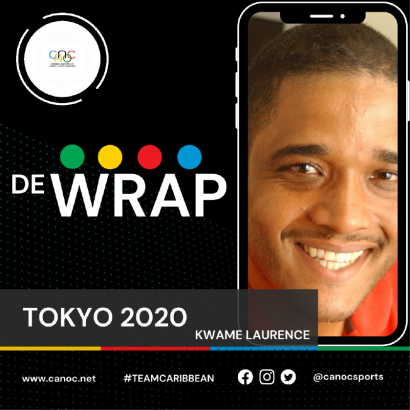